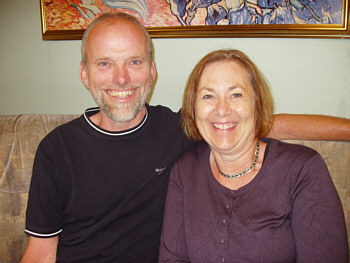 Twelve years ago Klaus and Herdis Mikkelsen, Kolding, Denmark, became acquainted with Hugo Nielsen and his Cell Com and when they last December together with their daughter Anja – on two motorcycles – went on a four-week trip to Mexico the small apparatus saved a critical situation.

After a fortnight Klaus hurt his foot, and it was so bad that he could not stand up. After treatment with Cell Com every second hour he was able to continue the long journey he tells. His wife and his daughter were not surprised for they can also relate many astonishing results.

Herdis has osteoarthritis but she has no pains

”I am a girl who suffers from a little of everything,” says Herdis Mikkelsen who for the first time came to Gram in 1997 after having been operated on her breast the year before.

”It was Klaus who suggested that I was treated with Parallelacupuncture to strengthen my immune system. We had seen Hugo Nielsen with Cell Com treat our daughter’s influenza with the result that it next morning was gone,” says Herdis, ”and after i started to go to Gram I have not caught a cold, only a small influenza but not every year.”

”At a time the doctors found that I had osteoarthritis in my knee and they offered me a new knee. I did not want it and I went to Gram with the results of an MR-scanning. Since I have gone their for periods, often with an interval of several months while I took three Glukosamin pills and every morning with Cell Com treated some points which Lone Nielsen had shown me. When my middle finger started to ache the doctors thought that it was osteoarthritis.

”Should we not try to do something about it,” Lone Nielsen said when she heard it.”

”When I drove home I sat drumming with my fingers on the wheel. Earlier my middle finger ached when I moved it, but now I could say that I was a person who had osteoarthritis but no pains. If something hurts here and there I go to Gram and at home use Cell Com once a day.”

”On April 20th this year it was found that I had a tumour of 3,2 x 2,2 centimetres which it was impossible for the surgeon to remove. It was placed on the small breast muscle and the doctors thought that it might be remains from the operation which had been there for twelve years.”

”I take a Femar tablet and go to see Hugo Nielsen twice a week and after a scanning on July 9th the doctors have established that the tumour in only two months has shrunk from 3,2 x 2,2 centimetres to 2,4 x 1,5 centimetres.

The doctors think that it is spectacularly and my husband and I are very satisfied with the result.”

Now Anja has no pains in her feet

Herdis Mikkelsen also tells about how her thirty-nine year old daughter Anja was freed from heavy pains in her “sunk down” forefoot. ”Last time Anja was home she went for a walk with my mother-in-law and when they came back Anja could almost not stand on her feet.

Next day I was going to Gram and I got permission to take my daughter with me. When Anja stepped down from the couch after the treatment the pains were gone and after one more treatment three days later she returned to Copenhagen with one of our two Cell Coms to use it on some points she had been instructed in. It was in May and her feet are still fine,” Herdis Mikkelsen ends her report.