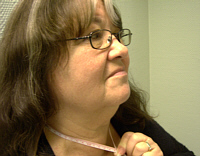 Picture: Alice Bridges-Hansen with measuring tape, which shows that goitre has occurred three centimeters since 3 July.

17-10-2008.
Goitre is further diminished and measuring less than 4 centimeters in circumference and 2 cm less vertically.

Fifteen years ago a physician told the sixty-three year old Alice Broer-Hansen, Ulstrup, Denmark, that she had a Struma and had to be treated with Eltroxin for her too low metabolism and to shrink the Struma.

Alice Broer-Hansen lives in a house, which the local authority had failed to connect with the main, and water has brought about a so severe attack of mould fungus in the house that Alice and her husband Find have to live in a Mobile home in their back garden.

”The mould fungus gave me a cough which two years ago got out of hand,” Alice says. ”I was then referred to Clinic of the pulmonary diseases in Skive. Here they prescribed a four-double dose of medicine and the following three weeks I fainted fifteen times. Then I had a bronchoscope under general anaesthesia, and afterwards the physician said, ”Your lungs cannot stand more coughing. You have a hint of a fibrosis pulmonis in both lungs. ”Moreover you have a big Struma.”

”On the Clinic for Endocrinology a doctor later told me, that the Eltroxin I had taken for fifteen years had no effect on Struma Nodosa. I had to have a treatment with Radio- iodine. About the same time a lung specialist in Copenhagen was able to tell me that I was poisoned by the two types of mould fungus which are in the basement and also on my papers!”

Before the treatment with Radio -iodine I was scanned and the result was sent to the Department of Endocrinology. The day I should have the treatment I was however not able to come and was called in for a new scanning. After a few days I went to see a consultant at the Department of Endocrinology and was told that there had been an error. Deeply regrettably the doctors had overlooked that I must have a treatment with Radio- iodine because I absorb just as much iodine in my salivary glands as in my thyroid gland.”

”In stead I must have an operation which should take place in Aarhus because the Struma was so big. In June this year I was called in to Aarhus where a surgeon said:

”We have to cut through all your ribs as the Struma is all the way round your windpipe.” Afterwards the ribs would be put together with wire. ”I can’t make my mind up just now,” I said, and then I went home and phoned Hugo Nielsen.”

”When he had got my story I asked if we might wait till after my holiday but he answered, ”No, you must come tomorrow.” Then I got Parallel acupuncture twice a week and wad told to let the body rest in my three weeks holiday. When I came to Gram after the holiday the Struma had shrunk one centimetre.

”My first treatment was on July 3rd. Now – two months later – the Struma has shrunk three centimetres and is no more stony but soft.”

Last Thursday I visited my doctor who knows that I went to Hugo Nielsen. ”Look at my neck!” I said, and then he asked if I had got treatment with Radio– iodine. ”No, acupuncture” I said. Afterwards he wrote in my medical record:

”Acupuncture is considered to be the likely reason to the shrinking of the Struma as it is possible to see with the naked eye”.

I also showed my doctor that my eczema was gone and that the water in my poor swollen legs had disappeared so that I was able to wear high-heeled shoes.”
”I had a new appointment in Aarhus on September 15th but I have cancelled it. At the same time I asked for a new appointment in half a year – not with reference to an operation but because it must be in the doctors` interest to see, what has been possible without being sawn through.”

Alice Broer-Hansen with the tape measure, which shows, that the Struma had shrunk three centimetres in only two months.